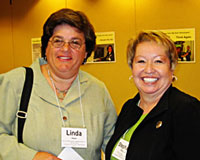 In 2006, IWITTS was awarded a $2 million five-year National Science Foundation (NSF) grant from the program on Research on Gender in Science and Engineering to fund the CalWomenTech Project. Between 2006 and 2011, eight California community colleges received expert support and technical assistance to help recruit and retain women into technology programs where they were under-represented.The Project was highlighted by NSF in 2009 for demonstrating significant achievement and program effectiveness. The Project finished working with the CalWomenTech colleges in June 2011. IWITTS submitted a one-page summary of the CalWomenTech Project to NSF after the Project ended that features some of the key CalWomenTech results, strategies and activities.

The CalWomenTech colleges targeted particular programs where women were underrepresented on which to focus their recruitment and retention efforts and to collect data on the college's progress.

The first cohort of colleges came on board in May 2007 and the second cohort in January 2008.

The first cohort from May 2007 includes:

The second cohort from January 2008 includes:

City College of San Francisco's (CCSF) targeted program was Computer Networking and Information Technology (CNIT) with an emphasis on the Digital Home Technology Integration certification (DHTI). CCSF was an NSF project partner in the CalWomenTech Project and Carmen Lamha, the Chair of the CNIT Department, served as Co-Principal Investigator.

Hear from the Colleges

"The CalWomenTech Project brings excellent resources to assist us in recruiting and retaining women in our technology programs. An excellent model that other community colleges would benefit from."

"The CalWomenTech Project provided us with research-based strategies for recruiting and retaining women that were new to us and will greatly enhance our ability to attract and retain women and assist us with improving our program overall."

"The CalWomenTech Project is solutions oriented: our college has a very doable recruitment and retention success plan along with support on its implementation. We're confident that we'll increase the number of women in our technology programs."

Cañada College in Silicon Valley is one of only two federally-designated Hispanic Serving Institutions in the Bay Area. Approximately 42 percent of Cañada's students are Latino. Cañada's 3D Animation and Video Game Art Program was the focus of the CalWomenTech Project. Game development is an extremely male-dominated field, the result of which is that most of the games developed do not appeal to females. Recruiting and retaining women in game development provides the opportunity to both increase the number of women in the field and the number of games developed that appeal to women and girls.

El Camino College in Torrance, CA has a Women in Industry and Technology (WIT) Program, which provides career information, support and assists with job placement of women in the Industry and Technology Department to "Empower Women for Economic Success." The occupational focus was on electronics, welding and the heating, ventilation, air conditioning and refrigeration program (HVACR).

Evergreen Valley College's automotive program in San Jose received a two-year grant of $250,000 from the California State Chancellor's Office to develop a Hybrid-Alternative Fuel curriculum for use statewide, and sought the help of the CalWomenTech Project to ensure women would be included.

Students who enroll in the Electronic Technology program may pursue either an A.S. or A.A. degree or a certificate which equips them for employment in the computer, software, biomedical, telecommunications, automotive, aerospace and consumer electronics fields. Or, they can continue their education at California State to earn a bachelor's degree in Engineering Technology.

Las Positas College in Livermore connected with the CalWomenTech Project to increase the number of women in their automotive and welding programs.