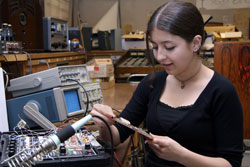 By the end of the CalWomenTech Project, these sites had all increased the completion rates for female and male students:

The IWITTS Project Model is to provide each college with WomenTech Educators Training on recruitment and retention at the beginning of the Project, exposing them to a wide menu of strategies.

The CalWomenTech Leadership Teams -- groups made up of eight to ten technology faculty members, counselors and administrators -- created an annual retention success plan. Almost all college instructors (including adjuncts) underwent retention training and in many cases the strategies were implemented in the classroom right away. During the CalWomenTech Project, the colleges completed three retention plans each, selecting on average, five broad retention strategies to implement each year.

The primary strategies in the Project -- chosen by the colleges themselves -- were classroom strategies (e.g. appealing to female interests, a positive classroom environment, building block skills, etc.) versus traditional support strategies such as mentoring. This is the reason they have impacted the retention of both women and men. If the colleges had chosen female-only support strategies (e.g. women in technology clubs) the data would not show such a positive impact on the retention of male students.

The retention strategies implemented soon after the initial training by the colleges showing the biggest leaps in completion rates included:

How successful were these initial strategies? IWITTS's external evaluators decided to ask the female students themselves.

Female technology students taking targeted introductory and advanced courses at seven of eight CalWomenTech community colleges were surveyed in 2009 and again in 2010 (2009 survey n=60, 2010 repeat survey n=43). These two surveys collected data on the demographics of the female students (age, ethnicity, family status, work hours, etc.) and specific CalWomenTech recruitment and retention strategies allowing the colleges to see what strategies female students had experienced, which ones they had found most helpful, and what strategies they most wanted to experience going forward. To IWITTS' knowledge, this is the first time that female students in technology courses have been surveyed on what retention strategies they have experienced in their courses and which ones they feel are most helpful.

Some highlights from the 2009 and 2010 female student survey results follow:

The women who took the female technology survey were a racially-diverse group, reflective of California's community college population. Over 60% of the female students surveyed in 2009 and 2010 were not of European-descent, and 20-25.4% of the students identified themselves as Hispanic. Another important result seen in the demographic section of the survey was that almost 80% of the women were working and taking technology courses at the same time with 32% working more than 40 hours a week or more.

It appears that instructors in the targeted classes implemented over half of the 20 recommended strategies in their classrooms and, after seeing the survey results, many instructors committed to making those strategies female students would most like to experience a part of their regular teaching strategies. Instructors on Leadership Teams that went over the results during a monthly conference call or strategic planning session came up with creative ways to start employing the strategies female students requested and found most helpful. One instructor from San Diego Mesa College came up with a plan to start assigning leadership roles in group projects randomly to avoid men taking the leadership role in groups more often than women (Rosser 1998), after she saw how many women wanted to try out a leadership role in class or found it helpful.

Furthermore, the survey results helped many leadership teams make more informed decisions about what retention and support strategies would be most helpful to their female students. For example, one of the colleges that put on a small get-together for female students in their technology program -- which none of the women were able to attend -- realized after seeing the survey results that their female students did not have time to attend face-to-face events and support groups outside of class. This same college took this new information into account and, as one of their retention strategies, invited a female role model to speak during the evening course that had the most female students enrolled. As this example demonstrates, a key outcome of the female student survey has been that the leadership teams at several colleges have taken the results and incorporated them into their strategic plans.

Retention Tools for Your Program