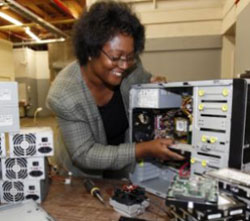 Founded in 1935, City College of San Francisco (CCSF) is one of the largest community colleges in the country serving about 100,000 diverse students annually at nine campuses. The Computer Networking and Information Technology (CNIT) department offers an associate’s degree and several certificates that prepare students for entry-level positions in network administration, computer technical support, and web development. From spring 2006 to fall 2007, women made up only 18.1% of students in the CNIT program.

In an effort to affect change, Carmen Lamha -- the Chair of the CNIT department in 2007 -- became the co-PI on the CalWomenTech Project and CCSF became the first community college to partner with the CalWomenTech Project to increase the number of women in targeted technology courses. To increase the representation of women in the CNIT program, CCSF's Leadership Team of key instructors, counselors, public relations staff, and administrators knew that they needed to first focus on recruiting and enrolling more female students into the program, and then on classroom retention strategies to keep the women in the program.

Over the course of the Project the college carried out additional strategies such as:

After just over a year of focusing on the recruitment of female students, the percentage of women in CNIT increased to 30.1% on average. Four years later at the end of the CalWomenTech Project, the average enrollment of female students in both introductory and advanced CNIT courses had risen by 45.9% from baseline. Women made up 26.4% of CNIT students when averaged over the entire CalWomenTech Project. In spring 2010, the program reached its highest percentage when the average number of women enrolled went to 33.2% -- an increase of 15 percentage points and 82.9% from baseline.

Increases in targeted introductory CNIT courses meant more female students in the pipeline, which by the end of the CalWomenTech Project had resulted in significant increases in the number of women in advanced CNIT courses with prerequisites. The representation of women in advanced CNIT courses went from a low baseline of 10.3% to 27% on average over the life of the CalWomenTech Project. This means that before the CalWomenTech Project began there were only 1.5 women on average in the advanced courses, while during the Project the average number of women rose to 8.6 per course. Now, instead of being the lone woman in a classroom full of men, female students in advanced CNIT courses can be comfortable in courses where both women and men are represented. The most impressive increase in Project occurred in the advanced courses in spring 2010, when the average number of women increased by 288.5% from 10.3% to 40% -- making the courses almost half women.

The primary retention strategies at CCSF -- chosen by the CCSF Leadership Team and CNIT faculty -- were classroom strategies (e.g. appealing to female interests) versus traditional support strategies such as mentoring, which is why they have impacted the retention of both women and men. While making conference presentations with IWITTS on CCSF's participation in the CalWomenTech Project, the key and co-leader of the Leadership Team described the cultural shift that occurred in their department during the CalWomenTech Project. The CalWomenTech Project acted as the catalyst that allowed CNIT faculty to come together as a team to work on student success for the first time. The two to three hour CalWomenTech retention trainings and brainstorming sessions on the development and implementation of retention strategies in the classroom allowed both full-time and adjunct faculty to learn new strategies and share existing ones that had worked for individual instructors.

Some examples of CCSF retention strategies and teaching to both female and male learning styles included:

The most important retention strategy for CCSF ended up being getting the entire faculty together for the retention training, so that the entire CNIT department could implement what they learned in their courses right away with support of their peers.

In order to retain the new female students CCSF was successfully recruiting to the CNIT program, the CCSF CalWomenTech Leadership Team and the CNIT faculty not on the Leadership Team all made a commitment to improving student success and increasing the completion rate of female students. After a series of CalWomenTech retention trainings and strategy brainstorming sessions with full-time and adjunct faculty, CCSF female retention rates went as high as 86.4% in fall 2010 -- an increase of 34.9% or 22.4 percentage points from baseline. In the aggregate, the average female completion rate over the course of the CalWomenTech Project was 78.5% -- an increase of 22.6% or 14.5 percentage points from baseline. The commitment of the entire CNIT department to incorporating recommendations and strategies from the CalWomenTech retention training into their classrooms made it possible for CCSF to improve the retention of both female and male students in CNIT.

The CalWomenTech Project model was designed to institutionalize gender equity strategies into the Project's community college sites. IWITTS worked closely with each college to ensure sustainability beyond the life of the Project.

CCSF plans to continue distributing the "Women in CNIT" posters, email, banner, website section and other outreach collateral developed during the Project. On the retention side, the CNIT instructors have made a commitment to continue using the retention techniques they learned and brainstormed together during the CalWomenTech trainings.