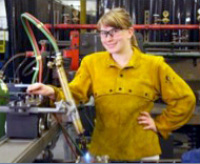 All eight colleges in the CalWomenTech Project  were required to carry out four core recruitment strategies during their first year of participation. In addition, the college could incorporate custom recruitment strategies into their annual strategic plans. One of the strategies recommended to the colleges during the training at the start of the Project was a press strategy beginning with a press release template provided by the CalWomenTech Project.

Las Positas College chose to develop their own unique poster design and they also developed a pink emery board that said “Women in Technology RULE” with a ruler on the back as a giveaway. Two other popular giveaways were Women in Technology mugs and water bottles.  These were distributed to key opinion leaders including students, Las Positas College administrators and counselors, and high school counselors and teachers.

The college also developed an extensive distribution plan in their second year with the help of a member of the business and marketing faculty and posted collateral in both community locations such as local Laundromats and on-campus locations such as the counseling offices.

Las Positas College has had great success in obtaining local press coverage which it has posted on its website. KRON 4 produced a news story on the college’s efforts to recruit more women through the CalWomenTech Project.  The Women in Technology Open House resulted in significant news coverage including newspaper articles ("Women Wrench, Weld Way to Success"), a news video, and photographs by the Contra Costa Times, the Tri-Valley Herald, and The Independent.

Las Positas College’s recruitment efforts paid off after 2 years of participation in the CalWomenTech Project.  The introductory automotive and welding classes at Las Positas College went from a baseline of 5.4% women to 14.3% in spring 2010 -- an increase of 8.6 percentage points and 168.4%. This is the most significant increase that any of the trades-focused CalWomenTech sites saw  in the Project.

In introductory and advanced courses overall, Las Positas College achieved an average of 6.2% (a small increase) with an earlier jump in summer 2009 when the percentage of female students went to 13.3% -- an increase of 155.8%. Any increase in the number of women in advanced courses has to start at the introductory course level. Las Positas College now has a pipeline of female students that should positively impact advanced level courses in future semesters.

Recruitment progress in the CalWomenTech Project trades-focused sites has been slower than with programs in computer-related technology (some of which have gone to a third or almost a half women), so Las Positas College’s success in improving their recruitment of women in introductory automotive and welding courses in two years is a true breakthrough. The college stayed persistent in their proactive efforts to recruit female students for two years before they turned the corner on female enrollment.

A major accomplishment of the CalWomenTech Project has been the improved retention of both women and men across many of the community college sites, including Las Positas College.  IWITTS attributes this improvement, evident among both female and male students, to classroom strategies employed by instructors.  These key retention strategies were taught in the WomenTech training and implemented shortly after the start of the Project by welding and automotive faculty at Las Positas College.

The welding and automotive programs at Las Positas College retained 100% of their female students for three semesters – spring 2009, summer 2009 and spring 2010. That is an increase from baseline of 34.8% and a good indication of future success for women in the programs.

The CalWomenTech Project model was designed to institutionalize gender equity strategies into the Project’s community college sites. IWITTS worked closely with each college to ensure sustainability beyond the life of the Project.

Las Positas College plans to continue distributing the “Women in Technology” posters, banner, website section and other outreach collateral developed during the Project. On the retention side, the automotive and welding instructors have made a commitment to continue to teach to female learning styles, a strategy that has worked to improve retention for both female and male students.