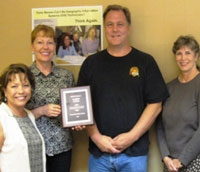 As the largest college in the San Diego Community College District, San Diego Mesa College serves a minority-majority population of nearly 27,000 students. Over 50% of the student population is female, and San Diego Mesa wanted to see those women equally represented in technology programs such as the Geographic Information Systems (GIS) program. The GIS program at San Diego Mesa offers both an associate's degree and certificate in GIS that prepares students to work as entry-level GIS technicians in government or private industry. From spring 2006 to fall 2007, women made up 34.6% of students in the GIS program and San Diego Mesa wanted to close the gender gap with a percentage closer to 50% to better match the makeup of their student population.

San Diego Mesa College joined the CalWomenTech Project in late 2007. The college's CalWomenTech Leadership Team of dedicated key instructors, counselors, public relations staff, and administrators began implementing strategies right away and started to see increases in the number of female students enrolling and completing in the very next semester.

San Diego Mesa College successfully completed all of the required CalWomenTech recruitment strategies -- taking photos of female role models in GIS for the CalWomenTech "Women in GIS" recruitment posters, flyers, brochures, PowerPoint presentations, emails, press releases, banners, and website section and distributing those same recruitment materials -- in the recommended timeline. By getting the customized CalWomenTech recruitment and outreach materials distributed in time for the enrollment period, San Diego Mesa ensured that undeclared female students at the college would learn about the GIS program in time to enroll right away. This explains why San Diego Mesa was one of the first CalWomenTech colleges to start experiencing success recruiting female students.

Additional strategies implemented successfully by the San Diego Mesa Leadership Team over the course of the CalWomenTech Project included:

By the fall 2008 semester, the percentage of women in GIS had increased to 50% on average for two semesters. After four years of involvement in the CalWomenTech Project, the average enrollment of female students in both introductory and advanced GIS courses leveled out at 40.3% -- still an increase of 16.5% or 5.7 percentage points over baseline. San Diego Mesa College is now close to hitting a goal of half women in its GIS program. In advanced GIS courses where students had to complete prerequisite introductory courses, the improvement in recruitment of female students was even more pronounced in the long term due to an increased number of women in the pipeline. The percentage of women in advanced courses went from a baseline of 31.5% to 39.4% on average through the end of the Project, an increase of 25% or 7.9 percentage points.

The most important retention strategy -- a implemented shortly after the Project began -- was that GIS instructors modified their teaching style based on the CalWomenTech training they received on retention.

When speaking about the impact that the CalWomenTech Project and IWITTS' retention training had on the GIS program and faculty, Kim Mathis -- one of the instructors in the introductory GIS courses and a co-leader on the San Diego Mesa College CalWomenTech Leadership Team -- said:

"We became more aware of the differences in women vs. men, including an imbalance in numbers in the GIS industry and a difference in learning styles and perseverance (with regard to low grades). As a result, we have redesigned our lectures and teaching style to be more encouraging to students -- whether it's the first day of class or half-way through the semester when distributing a low mid-term exam grade. As a result, I have had less students (and specifically less women) drop my class after the mid-term and higher grades overall."

The Leadership Team -- including all GIS faculty members -- decided to make holding additional on-site WomenTech retention trainings for new faculty/staff members a part of their retention plan after the outcome of the original training.

San Diego Mesa College began implementing retention strategies in the classroom immediately after receiving training by the CalWomenTech Project PI on recruiting and retaining female students, which allowed them to start retaining more female -- and male --students right away. The baseline completion rate for female students in the GIS program was 81.3%, and the baseline for male students was 80.3%. Soon after San Diego Mesa joined the CalWomenTech Project, the completion rate for both women and men in the GIS program rose to 100% for two consecutive semesters. In the aggregate, the average female completion rate over the course of the CalWomenTech Project was 88.8% -- an increase of 9.2% or 7.5 percentage points above baseline. The average completion rate for male students in GIS stayed comparable to that of the female rate at 87.7% -- also an increase of 9.2% or 7.5 percentage points. This parallel increase in the retention rates of female and male GIS students can best be explained by San Diego Mesa College's decision to focus on classroom and teaching strategies, instead of outside support strategies such as mentoring and tutoring.

As in recruitment, the greatest increase in San Diego Mesa College's retention can be seen in the advanced courses where the completion rate went from 82.5% to 92% in the aggregate for women and from 75.9% to 88.8% for men. That's an increase in retention of 11.5% for females and 17.1% for men. The large improvements in the recruitment and retention rates for female students in advanced courses are important because 1) students cannot enter them without successfully completing introductory courses and 2) it means that female students are persisting after the introductory courses.

The CalWomenTech Project model was designed to institutionalize gender equity strategies into the Project's community college sites. IWITTS worked closely with each college to ensure sustainability beyond the life of the Project.

San Diego Mesa plans to continue distributing the "Women in GIS" posters, banner, website section, Facebook page and other outreach collateral developed during the Project. On the retention side, the GIS instructors have made a commitment to continue to teach to female learning styles, a strategy that has worked to improve retention for both female and male students.